Recently, my representative in the Virginia House of Delegates, Hyland "Buddy" F. Fowler (R-Hanover, Spotsylvania, and Caroline Counties) posted on facebook that police in Baltimore should deal with protests by unleashing attack dogs on protesters:


This has made some rounds in the media. It was broken on Blue Virginia, and then was featured in Raw Story, Talking Points Memo, the Richmond Times-Dispatch, Washington Post, and in Michael Paul Williams' column in the RTD. An editorial  in the normally very conservative RTD called for Delegate Fowler to step down:


Fowler disgraces his party and his constituency. He is not a gentleman and ought not to be a delegate.

When his post was first publicized, Buddy deleted the posting and then issued an apology:


Republican Delegate Buddy Fowler has apologized and has taken down a post --calling his judgement a "mistake" pic.twitter.com/uJO4ly0ALJ
— Joe St. George (@JoeStGeorge) May 5, 2015

He later sent out an "explanation" in his constituent newsletter, stating that, "While I may not have used my best judgement in a recent Facebook post, my motives were sincere." He goes on to say, "It saddens me that there is a member of the Democratic leadership serving in the General Assembly who wrongly assumes my motives and attacks me publicly, all to advance his own agenda and worse, to raise money" and that Democrats and those who called him out "are focused on the wrong thing. This is not a black/white race issue, this about criminals taking advantage of a tragedy to commit crimes against innocent victims, most of whom are minorities."

Needless to say, the apology is not a real apology, not even close; it's a dodge and the explanation only explains that he has not come to grips with his own racism or with the racism that exists in our public democratic institutions. Are we taking advantage of this Buddy's being a racist to get him out of office because he's a racist? You bet we are.
This is not the first time that Buddy has posted something racist on his facebook page. About two years ago, he referred to President Obama as "Obammy," which is a racist play on words referencing "Mammy," a derogatory slavery-era term for older Black women. 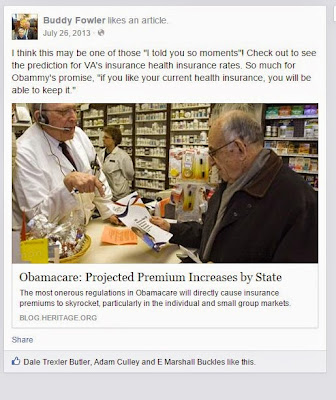 The Hanover Democratic Committee's Black Caucus wrote him a letter explaining to him why the term was offensive and asking him to take it down, but the post is still there.


When things like this happen where I live, I fantasize about moving. After all, this is the person who represents me in the VA House--I have even met him and talked with him a few times. Furthermore, a majority of the people in my district voted for him!

But the thing is, this is my community, too. I live here, too. I contribute to the community, too. I pay taxes here, too. Big city liberals may look down on southern, conservative, rural areas, but communities like mine are also home to people of color and their allies. People in the south are trying to change systemic racism, too, and have been since the advent of slavery. And despite presumptions to the contrary, there is no shortage of racism in supposedly liberal meccas like California and New York City--I have lived in both places. So instead of looking down on and writing off rural, southern areas, support the people of color and anti-racism efforts in those areas. Help us get the resources we need to organize and get out the vote. Getting out the vote and winning local elections matters tremendously. And, speaking of what and who matters, Black Lives don't just Matter in urban, more liberal areas; they matter everywhere.

Here's how you can help:


2. Especially if you are a Virginian, please contact Delegate Fowler and share your thoughts. (Here is the letter I wrote.) He votes on bills that impact all Virginians. His contact information is:


5. Donate to or volunteer with Buddy's opponent's campaign! Help get out the vote in Virginia's 55th district. Toni Radler is running against Buddy Fowler in the next VA-55 elections. She won a good percentage of the vote during the last cycle and she has a good chance of capturing more of it this cycle. She has spoken up about Buddy's racism and about institutional racism and she is also pro-women's rights, pro-gun safety, pro-universal healthcare access, and pro-public education.

Posted by Rachel Levy at 9:49 PM No comments: