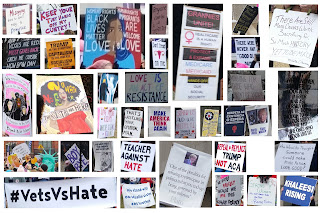 I was fortunate enough to be able to participate in the Women's March on Washington this past weekend. I went with my husband, parents, and my three children. My mom's sister was also there and so were my husband's parents. And countless friends and family friends were there. It was incredible. Like nothing I have ever seen or been a part of. Amazing. I have participated in many marches and demonstrations over the years, but it's not my favorite thing; I am more comfortable with writing and making phone calls and public meetings and with direct advocacy and activism, but I know showing up for marches and protests important, too.

Here are some things that I have been puzzling over regarding the march and that various friends and folks I follow on social media have brought up (thanks if you were one of them):

1. The march was not about any one thing or one issue. It did not mean the same thing to each participant. We should not try to dictate to people how they were supposed to experience it or what they were marching for. You can't give people prerequisites for marching. You can't screen them for participation according to life story, history of activism, or issues of importance (if any). A march is public event, this one with millions of people. And anyway, that's what diversity and pluralism and democracy looks like. Really, really messy.

In addition, feminism is not one thing and no one person gets to define it or decide who does and doesn't practice it. In that vein, this commentary was illuminating and illogical:  The author makes some good points--about the Women's March not advocating enough for policies, though I think that's what's supposed to happen when you go home. Otherwise, she talks talks a big game about unity and big tent feminism but then says, for example, that a Muslim woman wearing a veil can't be feminist and implies that religious faith is disqualifying. Huh? Maybe her "inclusive liberal feminism" isn't so inclusive after all. And maybe she is exemplifying the problem. Keep in mind that inclusive means to include and respect, not necessarily to accept as your own beliefs.

2. That being said, although the Womens March (not just in DC) was intended to be intersectional, it may not have been for all participants. We should not deny people accounts of their own experiences even if they make us uncomfortable. Collectively, women have a lot of work to do internally, as a group.

For example, I thought the DC Metropolitan Police did a great job and I personally thanked several officers along the route. That was very encouraging and a good sign. However, the DC police are well-trained in handling protests (though so far I am hearing the police in other cities were also supportive and professional). And, while the March had a diverse set of participants, it also had a lot of white people. It might be uncomfortable, but we must ask ourselves if that might have been different, according to history, if there weren't so many white people in the march. Black Lives Matter and NoDPL protesters have been peaceful, too.

3. Do not confuse critique (yes, even of the march) with lack of support. Critique is usually a sign of engagement and care. You can go to the march and be critical at the same time. We can have a big, inclusive Women's March and still talk about the role, for example, of white supremacy within women's movements. The two aren't mutually exclusive. Talking about racism and other biases and differing views among groups of women does not cause division. It helps to heal them, in my opinion. And anyway . . . The divisions. Were. Already. There.  The airing of those divisions is healthy and what the march was partly about.

On the flip side, however, I don't have a lot of tolerance for people who get hung up on the critiques only, without learning the story and without doing anything to change them. I like to earn my right to complain first. I find that when I contribute to an effort, many of my criticisms are cured because I gain insights and empathies  I didn't have before. If you are criticizing, ask yourself: Did you, in two months time, help to organize the biggest march in U.S. History? Did you contribute in even a small way? No? Then your criticisms should include what you're going to do to fix them and how you are planning to contribute.

4. If you didn't go to the march because, for example, you're offended that a black woman pointed out that racism exists among womens rights activists and even among progressives, then you probably weren't that committed to going in the first place. 54% of white women voted for Trump. It's a fact. Look, I don't feel like those women are my people, either, and there are a lot of white people in the country. Given what we know now, I'm actually surprised the numbers weren't more of an overwhelming majority. But it's there, it's real, and get used to hearing about it.

If you didn't go because privileged white women were excited about going, then you are not being very savvy about growing your movement and gaining their support. If you didn't go because one or a few other people going or talking about going said something that made you uncomfortable or said something that exhibited racism or bias, well, there were around 4,000,000 people marching in this country and you let a handful keep you away.

Of course, there have been accounts of white women objectifying women of color at the marches or becoming defensive upon seeing their signs. Not okay.

That all being said, it's important listen to why people didn't go or if they did why they didn't have a good experience. We will learn something.

5. There are a lot of parallels to the world of education (my world) here, especially since the K-12 teaching force is dominated by white women. We can all show up to a pro-public education march and still have critiques and work to do.

There are also implications for our two-party system. The Republicans get everyone to show up and then they sort it out later. That's why they win. (Okay, they also actively work to suppress votes of people in the other party.) As the head of my local Democratic Committee told me the other day when I asked how the conservatives in our state senate district could justify voting for some inexperienced libertarian whom they knew nothing about instead of the highly experienced and broadly respected state legislator running for the Democrats in a recent special election. "Well," she said, "they just vote for the option they have with the plan to work on them once they're in office."

Posted by Rachel Levy at 8:36 PM No comments: